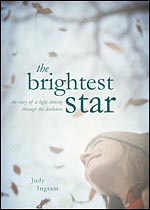 For a period of time there exist a smile that glistens as a star, and as you gaze upon it, it is as if God, Himself, was injecting you with a special warmth and joy.  Then suddenly blackness passes over, and the glimpse is gone, but the warmth is still there to your surprise.  Journey with me into the extraordinary life of Nina Ingram, and learn her secret to success in the short life that she lived. You will experience a profound change as you read this true story of God’s love and ability to create and leave behind an unforgettable legacy.

Judy Ingram was born in Texas to a poor farm family that was very dysfunctional. She was a nurse for 41yrs and held a Bachelor of Science degree from Texas Woman’s University in Denton, Texas. She held positions in Texas, Arkansas and Arizona.

She has had many years of ministry work and holds an ordained minister license in Texas.

She is the mother of four children, and was a single parent for fifteen years.  She now resides in Texas to further the ministry of her daughter’s legacy through a foundation called The Nina Ingram Foundation.

The book was named from a poem, written by Nina’s Aunt June.

A star appeared not long ago

And began to shine its light

This one came so softly

But knew the time was right

To mark each place and make it special

With the warmth and glow it gave

Not leaving any empty spaces

Every moment meant to save

You felt that its appearance

Was branded in your soul

And consistent on every occasion

To make or exceed its goal

The star became the brightest

And took no claim to be

So all the world could see

The darkness came so sudden

And caught us by surprise

The star we loved and saw each day

Was blocked from our eyes

The whole world was in shock

When the light went out that day

For that star was in its prime

Not ready to go this way

Brighter than it ever did here

In Heaven it has a special place

For we always feel it near

No other star will shine as bright

Or touch our lives as sweet

But we can certainly rest assured

That one day we will meet

Love to you always,

2 thoughts on “The Brightest Star”